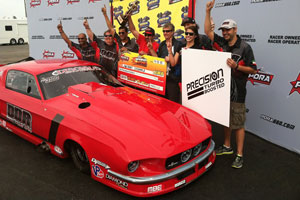 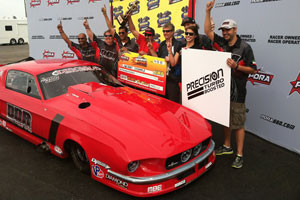 He then went a little quicker in the first round of racing to beat Jim Bell with a 3.79 resetting the MPH record 213.33 mph, though he would have to back it up within one percent to make it the official top speed.

The final was a match-up of twin-turbo’d ’67 Mustangs as Kevin Fiscus’ similar ride started from the third slot on the qualifying list and made it past the cars of Doug Winters, Jeremy Ray and John Strickland in the semis. A month earlier in Texas, Fiscus defeated Strickland in the Pro Boost final of the PDRA’s 2015 season opener.

It came at a cost, though, as a backfire right at the finish line blew the intake sky high off the top of Disomma’s 528-cubic-inch engine. The good news was his final-round speed officially secured the record for Disomma.

“I just saw a big flash but I didn’t know what happened. I saw something pop out of the hood and now part of the hood’s gone,” he said. “We made good progression each pass. My guys worked hard and it paid off today.”

I just want to thank Everyone: Saud AlZabin (DDR) for For the opportunity to run a competitive PRO MOD, And for the awesome Tuning, The best working CREW- Jeff, Ahmed, Jimmy J and Joe for chassis tips.

The sponsors: Atomizer Fuel systems, Big Stuff 3, Davis Technologies, Diamond Pistons, Trend, GRP rods, Total seal rings, Moroso, DiSomma Racing Engines. The PDRA owners / staff for a great place to race, To our Families, for letting us spend time away and the all late nights, And everyone cheering for us.